NEW YORK (February 28, 2018) –FlightSafety International announces that it is building the first simulator for the new Embraer 190-E2 aircraft. The Learning Center at the Paris-Le Bourget airport in France is being expanded to accommodate the simulator.

“We are pleased to announce the design and manufacture of our first simulator for the new Embraer 190-E2 aircraft and the expansion of our Paris-Le Bourget Learning Center,” said Bruce Whitman, Chairman, President & CEO.  “FlightSafety and Embraer are committed to provide operators of this new aircraft with the high quality training resources they require in a conveniently located, world-class facility.”

The expansion of the Learning Center includes a new 1,145 square meter (12,346 sq. ft.) building adjacent to the current facility. Construction is scheduled to be completed this summer.

The new facility will accommodate the Embraer 190-E2 simulators and two others which are to be determined.  The building will also feature seven classrooms, three rooms equipped with advanced training devices, six briefing rooms and other common use areas. 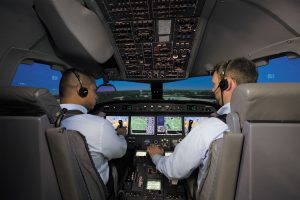