“We are pleased to once again be selected by Gulfstream to support the development of a new aircraft,” said David Davenport, President & CEO. “This further demonstrates the trust and confidence Gulfstream has in FlightSafety’s ability and commitment to provide the highest quality training and outstanding service owners and operators of the new G700 aircraft deserve and expect.”

The design of a new FlightSafety FS1000 full flight simulator for the Gulfstream G700 is underway. The simulator is being built concurrently with the design and development of the aircraft and will be integral to the flight test program.

The simulator will be installed at the FlightSafety Learning Center in Savannah, Georgia which is adjacent to Gulfstream’s main facility. The start of Customer training will coincide with entry into service of the aircraft. Additional training locations will be determined by FlightSafety and Gulfstream in accordance with Customer needs.

The advanced technology systems and components installed in this new FlightSafety FS1000 simulator will include the CrewView collimated glass mirror display, VITAL 1150 Visual System, electric motion cueing, and advanced instructor operating station. The simulator will also feature tightly integrated computer hardware and software across subsystems which allows for more accurate and higher fidelity simulation than found in other current and previous generation simulators.

FlightSafety has been the official factory authorized training organization for Gulfstream Aerospace Corporation for more than four decades. Training for the complete line of Gulfstream aircraft is delivered by FlightSafety’s highly experienced and qualified instructors using close to 30 full flight simulators, as well as other advanced training devices and equipment. Training is available at FlightSafety Learning Centers in Dallas, Texas; Hong Kong; Long Beach, California; Savannah, Georgia; Wilmington, Delaware; and at the London Farnborough Airport in the United Kingdom. 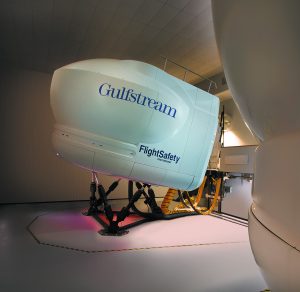