“Integrating FlightSafety’s immersive Mixed Reality capability and VITAL 1100 Visual System will significantly increase the effectiveness and efficiency of Cockpit Procedures Trainers,” said Jim Wheeler, General Manager, Visual Systems. “This integration can be easily performed on the majority of existing CPT’s. It will enable flight crews to complete a wide variety of training objectives that would typically be done in higher level training devices such as operational flight trainers and full flight simulators.”

Pilots will see and interact with the actual instrumentation and controls of the CPT while viewing FlightSafety’s VITAL 1100 real-time imagery on a display. This is accomplished through a headset integrated with the visual system and equipped with a 3 Megapixel pass-thru camera.

Mixed Reality equipped CPT’s provide an immersive training experience that is designed to enhance and accelerate training in a variety of learning environments. They can include basic cockpit system and feature familiarization, checklist orientation, engine start procedures and simulation, malfunction identification and corrective procedures, as well as taxi maneuvers in a fixed-wing aircraft and hover in rotary wing aircraft. These along with local area orientation and navigation, traffic patterns, and pitch and power settings, are designed to help crews learn to operate their aircraft safely within their typical operating environment. 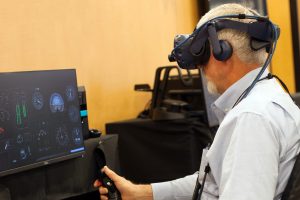