NEW YORK (March 28, 2018) –FlightSafety International announces the entry into service of a new Boeing 777-300ER full flight simulator the company built for use by the Japan Air Self Defense Force to train crews for operation of their new VIP transport aircraft. The simulator is installed at the Chitose Air Base in Hokkaido, Japan.

“We are pleased to have been selected to build a full flight simulator for this very important program,”  said Scott Goodwin, Vice President, Simulation. “ The Level D qualification by the Japan Civil Aviation Bureau demonstrates the fidelity of FlightSafety’s training products and our commitment to provide aircraft operators around the world with the highest quality training resources and support they require.”

The new FlightSafety FS1000 simulator features tightly integrated computer hardware and software across subsystems which allow for more accurate and higher fidelity simulation. It offers a new multi-function Instructor Operating Station designed to enhance the effectiveness of training by providing an intuitive interface, scalable graphics, and large multi-touch displays. The simulator will be equipped with FlightSafety’s VITAL 1100 visual system and feature a database of close to 100 airports to support the demanding mission requirements of this program.

“A growing number of government agencies and airlines around the world appreciate the many advantages FlightSafety offers as an industry-leading supplier of full flight simulators,” added Scott Goodwin.

FlightSafety has delivered over 140 simulators for commercial aircraft to date. They include a variety of devices for aircraft manufactured by Airbus, Boeing, Bombardier and Embraer and are utilized by airlines in Asia, Europe, the Middle East, and North and South America. 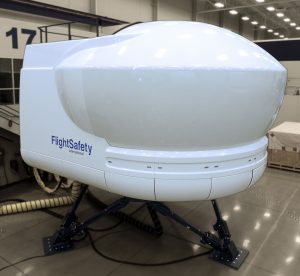