NEW YORK (May 19, 2017) –FlightSafety International’s recently launched training program for the Gulfstream G650™ located at the company’s Learning Center in Farnborough is receiving outstanding reviews. To date, operators based in 13 countries throughout Europe, the Middle East and Asia have completed Gulfstream G650 training at Farnborough or are scheduled to do so in the near future.

Some of the comments received since the training began in March include: “Brand new and fantastic G650 simulator. The best I have ever flown;” “The exercises performed in the simulator were very good and realistic as well as practical;” and “This training was simply great in all aspects.”

“We are pleased with the extremely positive response to the Gulfstream G650 training we are now offering in Farnborough,” said David Davenport, Executive Vice President, Commercial. “Our Customers appreciate the quality of the initial and recurrent courses our instructors provide using our Level D qualified simulator, MATRIX integrated Learning System, and course materials. As the only factory-authorized training provider for the G650, our training meets Gulfstream’s highest standards and includes the latest aircraft configuration updates and operating guidance.”

The training is provided using the fifth Gulfstream G650 simulator built by FlightSafety. The FlightSafety FS1000 simulator built for the Gulfstream G650 is designed to enhance training and maximize the effectiveness and efficiency of FlightSafety’s latest innovations in technology. They include the VITAL 1100 visual system, electric motion cueing, and new Instructor Operating Station. The FS1000 features tightly integrated computer hardware and software across subsystems which allow for more accurate and higher fidelity simulation than found in other current and previous generation simulators.

FlightSafety has been the official factory authorized training organization for Gulfstream Aerospace Corporation for more than four decades. Pilot, maintenance technician, and flight attendant training is offered for the complete line of Gulfstream aircraft using a fleet of 33 full flight simulators as well as other advanced training devices and equipment.

The training is available at FlightSafety Learning Centers in Dallas, Texas; Hong Kong; Long Beach, California; Savannah, Georgia; Wilmington, Delaware; and at the London Farnborough Airport in the United Kingdom. 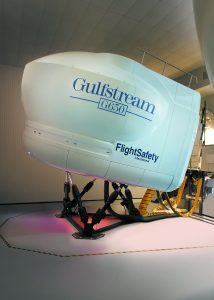