“We are pleased to provide training for operators of Cessna Citation Excel and Citation XLS aircraft equipped with the new Garmin G5000,” said Rich High, CEO, FlightSafety Textron Aviation Training. “Adding this important new program is another example of our commitment to provide programs that meet the current and future needs of our Customers.”

“FlightSafety Textron Aviation Training is recognized for their training excellence and we are excited to team with them to offer training on the G5000 integrated flight deck in the Cessna Citation Excel and Citation XLS,” said Carl Wolf, Garmin vice president of aviation sales and marketing. “The addition of the level D qualified simulator by FlightSafety, is yet another vote of confidence for the G5000 retrofit in these aircraft.”

The Garmin G5000 retrofit replaces the Honeywell Primus 1000 avionics. It offers a fully integrated, Automatic Dependent Surveillance-Broadcast (ADS-B) Out solution that complies with FAA and EASA requirements. The G5000 also features PBN/RNP 0.3 with LPV/APV approach capability, and supports a variety of options. They include SVT synthetic vision technology, enhanced situational awareness with SurfaceWatch, Link 2000+ and CPDLC support for terminal and enroute operations, as well as Datalink weather. 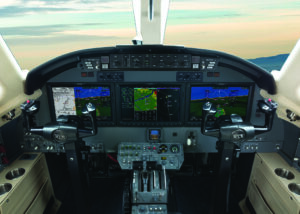