FlightSafety received a contract in November 2019 for FlightSmart from the United States Air Force Air Education and Training Command (AETC). It is for implementation of FlightSmart at Columbus AFB on 16 T-6A training devices, including Initial and Operational Flight Trainers.

“FlightSmart collects and analyzes pilot performance data using advanced analytics that are presented on a real-time web-based dashboard,” said Bert Sawyer, Director Strategic Management. “FlightSmart facilitates a departure from qualitative-based instruction towards evidence and competency-based training.  It employs Artificial Intelligence and Machine Learning technology to capture insights using evidence-based training methodologies and then predicts the best training approach to learning by providing instructors with a comprehensive understanding of a pilot’s strengths and weaknesses.”

FlightSafety is working closely with Columbus AFB instructors to optimize the design and development of the FlightSmart interface. It enables instructors to proactively address any deficiencies by optimizing the training curriculum while focusing on areas that need improvement, as opposed to repetitive actions rooted in a fixed syllabus. 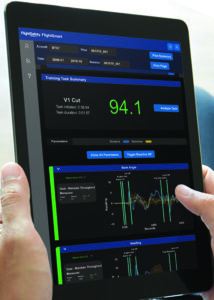