The new FlightSafety FS1000 simulator is scheduled to be installed at the SF Airlines training facility in Shenzhen, China late next year.

“We are honored that SF Airlines has signed an agreement with FlightSafety to build a Boeing 757 full flight simulator,” said John Van Maren, Vice President, Simulation Products and Services. “A growing number of airlines and government agencies and around the world appreciate the many advantages FlightSafety offers as an industry-leading supplier of flight simulators, visual systems and displays.”

“As one of the top cargo airlines, SF Airlines operates the largest freighter fleet in China and always attaches great importance to pilot training. FlightSafety is a time-honored simulator manufacturer. We believe its product will have high level reliability and fidelity, thus shall be of great help to the pilot training of SF Airlines,” said Miao Ligang, Director of Business Development Department of SF Airlines.

FlightSafety has delivered more than 140 simulators for commercial aircraft to date. They include a variety of devices for aircraft manufactured by Airbus, Boeing, Bombardier and Embraer and are utilized by airlines in Asia, Europe, the Middle East and North and South America.

SF Airlines Co., Ltd. is an air cargo company and member of the S.F. Express Group based at Bao’an International Airport in Shenzhen, Guangdong province. The airline provides services throughout Asia using its fleet of over 40 Boeing aircraft. 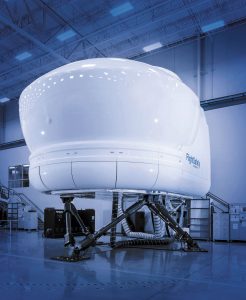