“Our new Advanced Rejected Takeoff Go/No-Go Recurrent course is designed to review and reinforce the skills and lessons learned during the Initial course,” said Dann Runik, Senior Vice President, Operations. “In addition to gaining proficiency in the Go/No-Go decision-making process, this invaluable course gives pilots another opportunity to fly their aircraft in the safe environment of a simulator under the high stress and demands of an emergency return to the airport after takeoff.”

Pilots will face up to 13 new scenarios during the four hour simulator session. Each scenario will require a decision by the flight crew to either continue or abort the takeoff. The course will also help to validate the operator’s specific takeoff briefings by testing them against various airports, environmental conditions and weights.

The course is now offered at FlightSafety’s Learning Center in Savannah, Georgia. It will be available in Dallas, Texas; Long Beach, California; and Wilmington, Delaware in the near future. Advanced Rejected Takeoff Go/No-Go Recurrent courses are also being developed for the Gulfstream G650 and Gulfstream G280 aircraft, and will be available later this fall.

FlightSafety has been the official factory authorized training organization for Gulfstream Aerospace Corporation for more than four decades. Training for the complete line of Gulfstream aircraft is delivered by FlightSafety’s highly experienced and qualified instructors using close to 30 full flight simulators, as well as other advanced training devices and equipment. Training is available at FlightSafety Learning Centers in Dallas, Texas; Hong Kong; Long Beach, California; Savannah, Georgia; Wilmington, Delaware; and at the London Farnborough Airport in the United Kingdom. 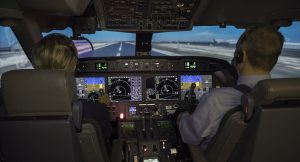