NEW YORK (August 16, 2019) – FlightSafety International has signed an agreement with Kenya Airways and Jambojet to install a full flight simulator for the Dash 8-400 aircraft in Kenya. This will be FlightSafety’s first installation of a full flight simulator for the aircraft in Africa. Dash 8-400 aircraft are manufactured by De Havilland Aircraft of Canada Limited (“De Havilland Canada”)

The new FlightSafety FS1000 simulator will be used by Jambojet, a wholly owned subsidiary of Kenya Airways, to train their pilots. It will also be used by other airlines based in Africa, and by FlightSafety to provide instructor-led courses. The simulator will be installed at the Kenya Airways Pride Center in Nairobi, and will be qualified by the European Union Aviation Safety Agency (EASA) and the Kenya Civil Aviation Authority following installation.

“FlightSafety is pleased to be working with Kenya Airways and Jambojet to bring a full flight simulator for the De Havilland Canada Dash 8-400 aircraft to Kenya,” said Steve Gross, Senior Vice President, Sales and Marketing. “Jambojet and other airlines that operate the aircraft will benefit from having local access to the simulator. It will help to increase proficiency by enabling pilots to train more often and reduce overall training costs.”

“De Havilland Canada applauds FlightSafety International, Kenya Airways and Jambojet on this agreement to position a full flight simulator for the Dash 8-400 aircraft in Nairobi to support high-quality crew training in the region,” said Todd Young, Chief Operating Officer, De Havilland Aircraft of Canada Limited. “This development is a testament to the growing size of the fleet, and the Dash 8-400 aircraft’s flexibility to meet diverse operating environments in Africa and the Middle East.”

With its acquisition of the Dash 8 aircraft program, Longview Aviation Capital has proudly re-launched De Havilland Aircraft of Canada Limited, one of Canada’s most iconic brands. De Havilland Canada’s portfolio includes sales and production of the Dash 8-400 aircraft, one of the world’s most important commercial aircraft, as well as support for the worldwide fleet of Dash 8-100/200/300/400 aircraft. The company is committed to maintain the brand’s 90-year-old reputation for expertise, excellence and reliability in its manufacturing and commercial operations, and through its global network providing customer services and support. 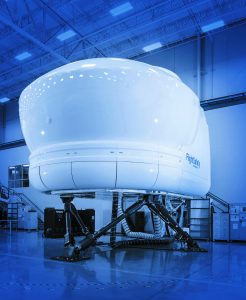