NEW YORK (October 15, 2018) – FlightSafety International announces that the Dassault FalconEye Combined Vision System HUD has been incorporated into its Falcon 900LX simulator in Dallas as well as the Falcon 8X and Falcon 2000LXS simulators in Paris.

The FalconEye HUD will also be installed in a new Falcon 2000LXS and Falcon 900LX interchangeable simulator which is scheduled to be available for training at the Teterboro Learning Center in August 2019.

In addition to installing the FalconEye HUD in the Falcon 900LX simulator in Dallas, FlightSafety has upgraded the simulator to the new FlightSafety VITAL 1100 Visual System that significantly enhances training by providing highly detailed mission specific imagery with vastly improved scene content and exceptional environmental effects.

“Providing the FalconEye HUD in our training programs for the Falcon 900LX, Falcon 2000LXS, Falcon 2000S, and Falcon 8X clearly demonstrates our commitment to support Dassault and to enhance the training we provide to operators of the aircraft,” said Steve Gross, Senior Vice President, Commercial.

The training course provides pilots with the information and training required to operate and take full advantage of the FalconEye Combined Vision System (CVS) HUD. Ground School and simulator training addresses normal and abnormal operations, operations procedures and limitations in all phases of flight.

In synthetic vision system (SVS) mode, the camera displays a 40° horizontal by 30° vertical field of view with a 1280×1024 resolution, one of the widest angles on any HUD, ensuring full coverage of the viewing area with no tunnel vision effects. 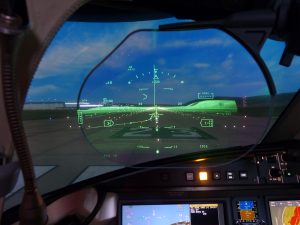