“The development of the Embraer E-Jets E2 training program is another example of the commitment of FlightSafety and Embraer to provide high quality courses that meet the specific needs of operators around the world,” said Dann Runik, Senior Vice President, Operations.

“This is a very important milestone for the E-Jets E2. These great results were possible due to the joint efforts of Embraer and FlightSafety. The approval by ANAC, EASA and FAA will support our customers with their initial type rating course and provide more flexibility for their operation,” said Alexandre Juliano Bianchi, Embraer Regulations and Flight Standards Director.

The training will be offered at the FlightSafety Le Bourget Learning Center in Paris this summer using a FlightSafety-built Embraer E190-300 E2 full flight simulator and other advanced training technology.

FlightSafety serves as the factory authorized training provider for the majority of Embraer’s commercial and executive jets. FlightSafety and Embraer work closely together to develop new training programs, update existing courses and determine when and where additional flight simulators will be needed to support Embraer aircraft operators around the world. Training is provided at 13 FlightSafety locations in Brazil, France, the Netherlands, South Africa, the United Kingdom, and the United States, using a fleet of 32 full flight simulators and other advanced training devices. 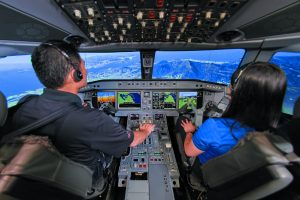