“We are pleased that United Airlines has selected the FlightSafety Academy to support its Aviate program,” said Steve Gross, Senior Vice President, Sales and Marketing. “The Academy’s reputation for quality, and its commitment to train pilots for safe aircraft operations, will help United Airlines recruit and prepare candidates to fly as First Officers. This is another example of the highly effective training solutions and services the Academy has provided to airlines around the world for over 53 years.”

Aviate offers flight students and commercial pilots a career path to potential employment with United Airlines. Candidates who apply and are selected to join Aviate, will receive clear direction on the qualifications and milestones that must be achieved based on their current experience level. This will enable them to build the flight hours needed to prepare for a potential position with accelerated flow thru to United Airlines as a First Officer.

FlightSafety Academy offers a wide variety of programs tailored to the specific needs of airlines, government and military agencies, cargo, corporate flight departments, other flight training organizations, and individuals with no prior flight experience.

The Academy’s fleet of 65 aircraft includes Piper Warriors, as well as Arrow and Seminole aircraft equipped with Garmin G500/650 series avionics. The aircraft are maintained to the highest standards and exceed FAA maintenance inspection requirements. Students fly out of an ATC controlled airport with instrument approaches under an airline style dispatch operation. The 30-acre campus is equipped with a full array of training tools including multi-media classrooms, FAA testing lab, flight training devices, and an Air Traffic Control communications lab. The Academy has on-site accommodations for more than 300 students,  student and instructor lounges, recreation room, pilot shop, and other amenities typical of a university. 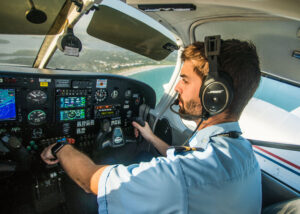