“We are pleased to announce the FAA qualification of the first simulator for the new Gulfstream G500,” said Bruce Whitman, Chairman President & CEO. “Our close working relationship with Gulfstream has resulted in full flight simulators and other advanced training devices that reflect the exact flying and operating characteristics of the aircraft. Operators around the world will benefit from comprehensive, technologically advanced training programs developed and delivered according to their specific needs.”

“The certification of the G500 full flight simulator is a major step forward as we prepare for the G500 aircraft to enter service later this year,” said Mark Burns, president, Gulfstream. “Throughout the G500 program, FlightSafety has been diligent in ensuring our customers have the training they need to accept delivery of their aircraft and quickly leverage its many capabilities.”

A second simulator, which will be interchangeable between the Gulfstream G500 and Gulfstream G600™, will be qualified following aircraft certification. Pilot and maintenance technician training will then begin using both simulators at FlightSafety’s Learning Center in Savannah, Georgia. FlightSafety and Gulfstream will determine the timing and location of additional domestic and international training sites according to Customer needs.

FlightSafety has been the official factory authorized training organization for Gulfstream Aerospace Corporation for more than four decades. Training for the complete line of Gulfstream aircraft is delivered by FlightSafety’s highly experienced and qualified instructors using close to 30 full flight simulators as well as other advanced training devices and equipment. 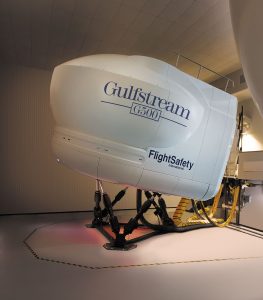